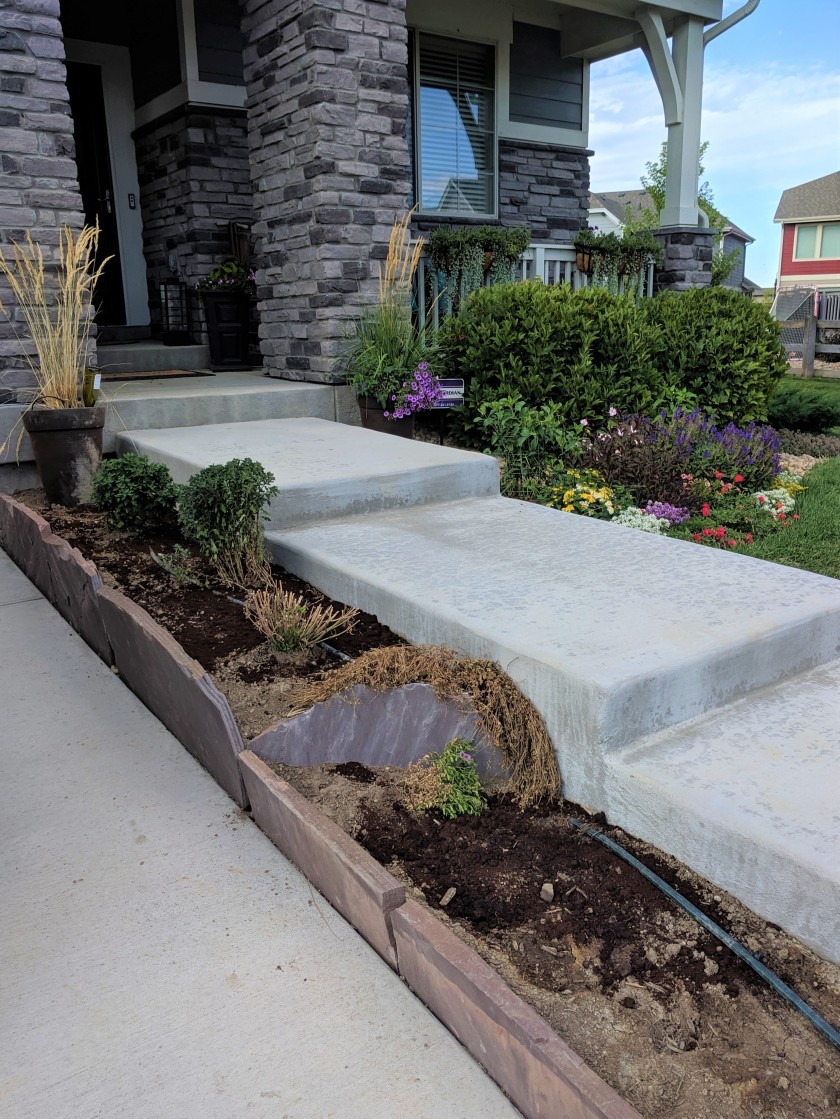 How do you plant a narrow garden? We’ve recently tackled this question. This post provides a little background and the first steps we took. In another post, I’ll share my design process. Finally, I’ll provide an update of the finished product.

I call our long, narrow planting area the Hell Strip: it’s an area 2 feet by 35 feet between the concrete driveway and steps leading to our front door. In the summer, it’s baked from both sides by the heat of the cement.

This area was installed by the builder at ground level, with builder-installed plantings consisting of: one Feather Reed Grass closest to the front porch, four more right in the middle, and two Russian Sage planted near the sidewalk, all surrounded with an unceremonious dumping of river rock.

The Russian Sage immediately had to go. It gets way too large for such a narrow area. Then, the river rock had to go. Planting through river rock, trying to avoid spilling soil into the rock (I’m so picky about keeping dirt out of the river rock!) is just too much effort. I also believe that river rock adds to the heat (thermal mass, perhaps?) around a plant, and in an already very hot area, we didn’t need any more of that. I scooped it all out and put down shredded cedar (“gorilla hair”) mulch. Shredded cedar mulch is cheap, effective, and so easy to work with.

A short while later, after the stark 22″ drop off the side of the top step had worn on me for a while as a safety hazard, I decided to install a simple flagstone DIY raised bed using upright flagstones. Using “Colorado Chocolate” flagstone, I buried the flagstone on its edge about halfway into the soil. Of course, I ran into a challenge. The driveway concrete juts out below the soil line, and despite all efforts to hammer/chisel/file/break off those chunks, I had to place the flagstone at a slight angle, leaning out ever-so-slightly at the top. I was temporarily satisfied, but it was far from perfect.

I filled my flagstone raised bed with soil, replanted the Feather Reed Grass and a couple other little plants (Salvia “May Night”, Potentilla neumanniana, and some Sweet Alyssum annual filler) and called it good-enough for now. Note: I also installed this raised bed without permission from the HOA, so in my mind it was a semi-permanent solution and I half expected a nasty-gram to undo it.

Later, a few more plants were added, but still there remained several problems with the Hell Strip.

A Little Extra Help for Some Real Progress

Then……we decided to address our backyard drainage problems (oh, much more on that later!) with the help of professionals, and suddenly we had the perfect opportunity to also let the landscapers finish the narrow raised beds using the right tools and plenty of brawn. They cut away the protruding subterranean concrete, used much larger pieces of flagstone (SO.HEAVY.) and installed the bed properly, with a top-tier planting level even with the other side of the steps. Oh yeah, and I got formal HOA approval for the whole thing. Bazinga!

The landscapers cordially planted the few plants back into the bed. These plants will be moving, because now that this bed is finally as I originally intended, planning and planting can commence! Soon I’ll share my design process for planning this long, narrow garden bed to ensure that it looks great and ties in with the bed on the other side of the steps.

If you like this idea for a flagstone raised bed, go ahead and Pin It! Or leave a comment, that’s great, too.