***This post was originally from October 2010! Somehow an edit caused it to repost in October 2011.  Sorry for the confusion – this bathroom remodel is all done and here’s a quick jump to the reveal if you haven’t seen it yet!  And now back to the original post…***

When we first moved into our house, we anticipated changing a few things.  And we also knew that a couple of those things would involve some significant expense, because they’re not things we’re willing to DIY.

One was our fireplace. 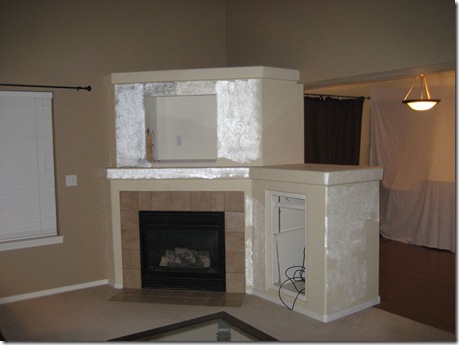 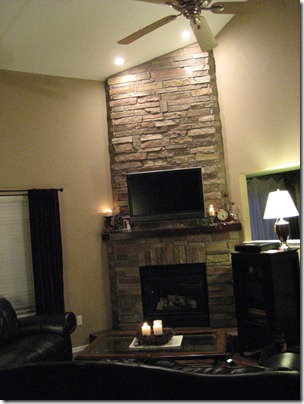 The second major project on the to-do list was our master bathroom and closet.  I’ve never shown pictures of these areas before….so brace yourself.

This is what we’ve got now:

Shelves and hubby’s dresser at the end – both packed/organized about as full as I can get them.  I can’t reach that top shelf without the utility ladder, so it’s not a daily-basis type shelf.

And a wall along the left with some hooks.  Some of my dresses are hanging from these hooks because there’s no room for them to hang down on the other side.  That Safeway bag is my VERY classy storage solution for all my nylons and tights.  Nice, huh?  If you really want one, email me and I’ll tell you where you can find one 😉  Har!

So, in general, a bigger closet would be a huge improvement. I currently have a few long dresses also stored in the guest room closet, which I really want to get out of there because that closet will eventually need to be available for someone else’s things. 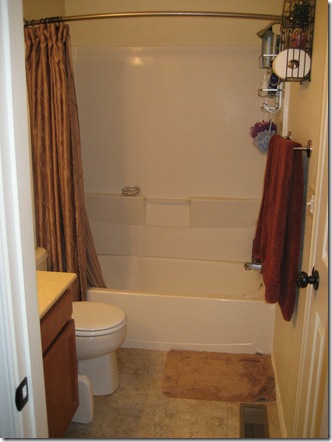 It has the bath/shower with the nice 3-piece vinyl tub surround… a toilet (jackpot!)…and a single vanity.  The bathroom door, when open, completely blocks the door into the closet.  And on the floor is a previous owner’s admirable attempt at an upgrade….peel-and-stick tile.  And yes, it’s the exact same kind and color as used on all those HGTV shows.

I try to keep the vanity top less than 80% covered with my stuff, so I’ve gotten a little creative:

Jewelry storage – notice the push pins (hey, at least I made an effort at using CLEAR ones):

I know we’re lucky to have a master bathroom.  I took it for granted until I got the impression from our next door neighbor that they DON’T have a separate bathroom and they share one with their two little kids.  I’m glad we have our own.  Incidentally, our hall bathroom/cat’s bedroom/guest bath looks strangely similar:

And on the other side of the bathroom wall:

But we have another idea.  I’ll tell you all about it tomorrow!

*This post was originally from October 2010!  Somehow an edit caused it to repost in October 2011.  Go HERE to see the next post about our bathroom remodel!*

The revamped hell strip between the driveway and front steps is filling in nicely! 🤩 This very long, narrow bed was completely redone last year, with contractors helping to create two raised tiers with vertical flagstone. With the ground level portion, there are now three tiers planted with variegated irises, Blackbeard Penstemon (because #foliagefirst !) and Supertunia Picasso in Purple, which looks quite fuchsia, I think ☺️. Ooh yes, and a span of daffodils runs the entire length, though they are admittedly looking a bit ratty at the moment. They'll stay for another week or two before getting trimmed back. ☺️✂️ How do you tackle long, narrow planting areas?
I enjoy the Dwarf American Cranberry Viburnum shrubs more every year. They aren't consistently prolific bloomers, but it does seem to be occur more frequently as they age. This guy is one of the oldest original plants (a whole 4 seasons old 😅) that hasn't been moved. I think it's saying "thanks!"
I'm trying a new emitter in these pots! I found the individual drippers just aren't enough, especially with multiple plants, so this year I'm trying the adjustable sprayer type. The tubing snaps into a stake that holds it upright and the threaded sprayer cap can be loosened or tightened to adjust the flow. Fingers crossed that all four plants can get a piece of the watering action 😅
The dianthus drift is coming into bloom! It smells lovely, too, just like carnations 🌺. A big load of mulch is due on almost every bed, so disregard those less than beautiful drip hoses. The pink petunias are Supertunia Vista Bubblegum. I had these two extra from another area and thought they'd fill in nicely around the base of the bird bath, but they're a little clashy at the moment with the coral dianthus. I have a huge tray of purple alyssum growing in the house that will finish off this bed with a thick front border of purple. Have I mentioned this is my most challenging bed? This is our fourth summer here, and I've been struggling and amending until now. Fingers crossed I did enough work to keep these plants alive and thriving in this area!
I'm finally getting some pots planted up, and I'm particularly happy with this one 🤩. This is actually one of a pair flanking the east entrance to the patio. Superbells, purple fountain grass, dichondra (hiding on the other side) and ornamental oregano should make for a lovely vignette. What are your promising pot combos so far? 🌺
Lady's Mantle has become one of my favorite plants. It does equally well on the part shade, eastern side of our house as it does in a western-exposure full sun area down the street. It has interesting leaves, a tidy shape, and it's well behaved! Even without blooms, it's a welcome green mound early in the season! 🤗
%d bloggers like this: