I thought it was time for a stroll through the backyard.  After all, a summer makes a huge difference, and for any plants on their second season, it’s an even hugeR difference!

Let’s just get to it, shall we?

But first, here are a couple “way before” pictures – from 2 summers ago, when we moved in: 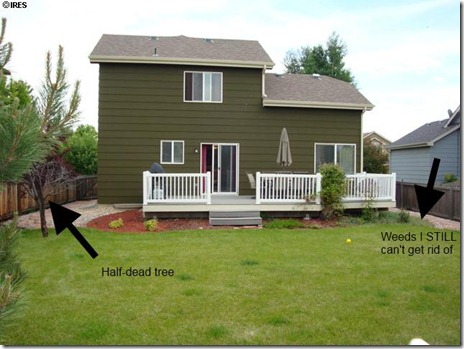 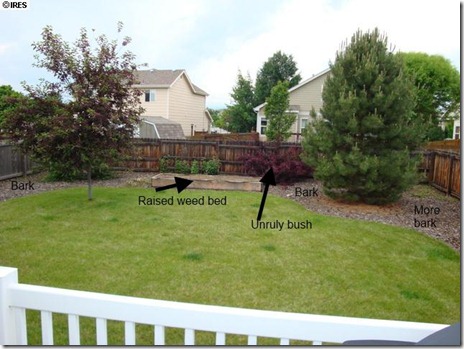 And now, starting from the gate:

(The plants are looking a little more tired than usual because 1) we’re still about 10 degrees above the usual temperature for this time of year and 2) my usual trimming and upkeep has fallen a bit to the wayside due to the pregnancy.  My watermelon of a belly just isn’t engineered for gardening I guess.)

Remember the Karl Foerster grass divisions I got from my mom earlier this summer?  I planted two here along the south (HOT) wall of our house, and they’ve grown up pretty nicely to help camouflage the rain barrel.  I’m pretty sure they’re not Karl Foerster grass, too, but we don’t actually know what they are, so Karl it is! 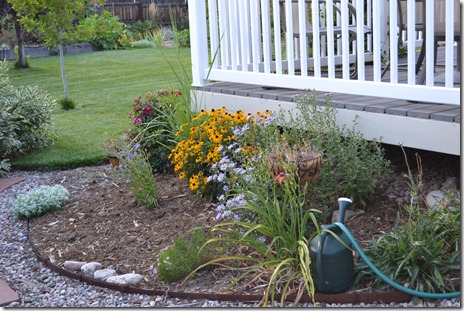 Back in May or so, this bed looked like this:

Since then, it’s obviously grown… the lily (to the left of the watering can) now needs trimming, and I managed to (probably) Round Up  one of the three scabiosa (pincushion flower) you see there in the corner.  This bed has terrible weeds, so it’s also the subject of this summer’s Operation Annihilation, and it’s possible the flower got a little too much poison and I wiped it out.  I discovered earlier this spring that the particular weed in question has DEEP, SKINNY roots that don’t come all the way out when pulled…so Round Up is the next best thing.  Almost every weekend!  I will win this war…

As we round the corner of the deck:

On the right we have a pink rose bush in need of deadheading, a strategically placed pot that is supposed to get hit by the sprinkler but needs to be moved again because it’s still parched, the massive PITA climbing rose that’s never bloomed and refuses to be trained to its trellis, and the Beast clematis.

To the left is our red twig dogwood, which is in need of serious cutback this fall, a Mongolian Bells clematis (a perennial, not a vine), some adorable shasta daisies planted this spring, and what I know to actually be a Karl Foerster grass (now you can see how different actual Karl Foerster looks from those divided plants!)

Now we’ll head around the deck:

How ‘bout those empty flower pot holders on the railing?  Yeah classy!  Like I said, it’s been SO HOT here, I finally took the petunias out of those holders and put them down on the ground where they’d get hit by the sprinklers.  I just couldn’t keep them watered enough.

Here’s the collection of planters back in oh…June?

The white flowered bush is a hibiscus (love that thing!), and next to it is a pink phlox.

Around the corner is a Sweet Autumn clematis on a homemade trellis.  I planted this guy earlier this spring, when it was about 6 inches tall.  Next year should be fun to see what it does!

This is also a great shot of our partially repaired rotting deck that I keep whining about.  It’ll get rebuilt in the next couple of years.  Until then, I’ll just keep whining because – seriously – who builds a deck without using treated lumber? What a great feature on a house…to have to tear out and rebuild.  GAH.

Starting from the left in this bed is a cute red and yellow columbine planted this spring (next year again should be much more fun!), next to a perennial geranium and our motion activated sprinkler.

Then comes a deep purple salvia also new this season, a balloon flower in front of the trellis (pretty tough to see, but also pretty tough!  Nick dug this guy up and reburied it six inches under the surface without realizing it, I accidentally found the root and repositioned it when I planted the salvia, and later Nick mistakenly Round Upped it…and it still lives!), a euonymus bush with ridiculously tall lilies in front of it (they will be transplanted this fall – “border lilies” my butt), and the white clump is just annual alyssum.

Pregnancy takes no prisoners!  And it doesn’t hide the bodies very well either, apparently…

And now we head to the back of the yard, hose and all.  (I’ll make sure the gardener isn’t such a slob next time…or not)

The gigantic plant in the front is our summer squash.  It’s busy creating its own army.  The bamboo is alive and against the fence – thirsty as usual, so it’s splayed out a little more than it normally would be.  We also haven’t trimmed the winter topkill out of it yet (since part of the bamboo’s function is to keep kids from hopping the fence right there), so those straw colored stems are a bit of an eyesore as well.

Priority next summer will be a manual-hook-up drip system to try to get better water to the plants back there.

For some perspective, here’s an early-Spring shot of this corner of the back bed:

The rest of the back bed is then taken up with the raised veggie bed and the perennials planted behind it.  Here are some random angle shots of that area:

First, earlier this spring (the plants were a little perkier then!):

The tomatoes have some kind of issue and look terrible, but they’re producing like crazy, so I’m not worrying about it. 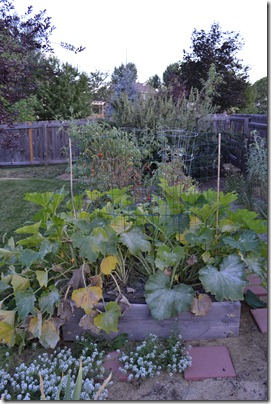 And the zucchini is obviously getting a little worn down as well!  Good thing, because I’m running out of recipe ideas for zucchini…

So concludes the tour of the backyard

Like I said, it’s perpetually thirsty and baked from this heat, so it could look a little better, but it’s still a nice improvement from two summers ago, and it’ll just keep getting better.

As I type, the Autumn Joy sedum is just barely starting to turn pink.  In another couple of weeks, it’ll be a beautiful deep red – perfect for fall!

I plan to replace some of the spent petunias etc (especially on the front porch) with mums, so we’ll be due for some general fall sprucing up here soon.  I’ll keep you posted

Meanwhile, one of these days, I’ll do a quick tour of our front yard as well.  The mums look fabulous, the planters are limping along, and we recently learned how great a sickly spirea can look after it gets doused with a bag full of ladybugs.  Stay tuned!