You’ve probably seen our fireplace transformation from the boxy, drywall “entertainment center” to the stone façade fireplace.  And no doubt you’ve seen some pictures of our living/family room.

Me too, and I’m not really digging that room.

Don’t get me wrong, I LOVE the new fireplace and wouldn’t change a thing about it, but the rest of the living room has never looked very balanced to me.  It looks just a little….wonky?  I’ve been thinking for a while about *why* that is…and maybe I’m starting to make some progress.

By the way, the living room is also known as “the room that gets ignored for two years because we’re working on other areas in the house.”

This will be changing…just as soon as I figure out what to do.

Here’s what I mean:

The focal point of the living room is clearly the fireplace with the TV mounted on it.  Actually, the TV mount is a feat of engineering, in my opinion.  It pulls really far out from the wall and swivels some ridiculous number of degrees, all while supporting a heavy (even though Nick says it’s not) TV. 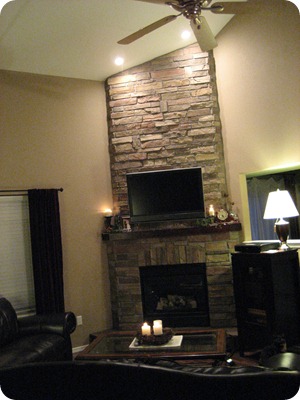 When we were looking for LCD TV stands, I was really impressed with what’s out there.  They have a lot of functionality and have to be sturdy and lightweight at the same time.  I even recall some user-posted pictures of a guy doing pull-ups on his TV stand to demonstrate how strong it was.  I won’t be doing that with ours (because I’d still be afraid of ripping it out of the wall somehow), but it does make you feel better to see someone confident enough to try it!

So the TV is the focal point.  You get it.  Moving right along like the rambler I am…

We turned the furniture on an angle so that it faces the TV.  It works great this way, as it makes the couch/tv viewing area seem very cozy, and you can see from the butt divots in the couch that it also makes for nice, straight-forward viewing.

Where the problem comes in….that I’d like to somehow address…is with the other side of the living room.

Here’s what I see:

2)  The furniture is too large.

3)  The front corner, where the cat tower is, is an expanse of unused space. 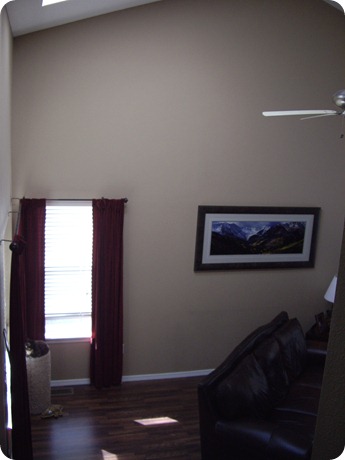 And here’s what I think might work….(aside from/alongside finding some smaller-scale furniture)

…I think this room would look much more balanced if the “other” side is given its own identity from the tv side.

I have some ideas for this little area…but first I want to hear what everyone else thinks.

What are your impressions?  Does this front area look odd at all?  Underutilized?  Raise the curtains?  Put up a larger wall vignette?  Un-center the artwork, and put something up to its left? Get rid of the giant furball that somehow made her way into every single photo? (just kidding, the furball stays.)

What are your thoughts on symmetrical windows…with different window treatments?

I’m curious to hear what your first impressions are…and then I’ll show you my ideas.

P.S. If you’re noticing anything funny or weird going on around this blog…you’re not crazy.  Times, they are a changin’.  But don’t worry- it shouldn’t affect you at all (and if it does, it will be resolved within a day or two.)