First of all, let me disclaim that I’m not a designer, nor did we use a designer for this project.  And I’m saying this because *clearly*, I should be a designer, right???

Ok, not exactly.  Actually, I’m saying it because I know I’ll throw around some terms here and there that are probably not entirely accurate and/or even close to the proper term.

If you feel really strongly about a term I’ve butchered, feel free to leave your sweetest comment telling me about it.  I promise I won’t cry.

And, if you haven’t seen the “main” master bath reveal, go here.

Nick and I picked out our bathroom finishes with our design style in mind, which is a loose jumble of cottage, rustic, and maybe just a little Tudor and/or Victorian touches.  Alright, and I’ll just throw it out there that I’m starting to lean toward some “Ozark” style – for lack of a better term – from a last summer trip to Silver Dollar City.  Maybe I could call it “Country Bumpkin Chic”?  Or “Appalachian Awesome”?  (That would be ‘Appalawesome’, of course.)

Galvanized pails, mason jars, water pumps and water wheels, oil cans, etc…..I’m sort of gravitating THAT way lately.  (Another disclaimer: 95% of the country would identify both Nick and me as country bumpkins anyway, so maybe it just comes naturally.)

Basically, we aim for not-too-polished, don’t give a rip about “clean lines” (versus…dirty lines? messy lines?  I’ve never really gotten it), and we like to be just a tad different than the mainstream trends, though we do like many of those.

So anyway….um…I’ll just quit yabbering and get to the point.

I’ll start with the biggest bathroom elements:  the shower, the floor, and the vanity.  Then I’ll hit a couple of details, like the paint color.

I came up with the “quoin” tile pattern after searching and searching for pictures of what I was thinking of…and coming up empty.  This is a quoin (the term was finally discovered after many, MANY Google searches):

It’s technically an architectural element, not just a look (I think).  It also happens to decorate the edges of the walls surrounding the dumpsters at our local Starbucks.  We spotted said “architectural-dumpster-detail” while sitting in the drive-through one day…and realized we could make it work for us even in a 2-D tile setting, using different colors.  Inspiration is everywhere, I guess.  Dumpsters included.

Quoins remind us of castles…like this (fancy mansion that’s supposed to look like a castle?):

So it seemed like a great way to add just a touch of rustic flair to our shower, without being too over-the-top.  With the “quoin” at the front edges, a brick pattern everywhere else, and a couple of other elegant-yet-old-world touches like the chair rail and the “medallion” tile (that’s what I call it), we got exactly what we were going for. 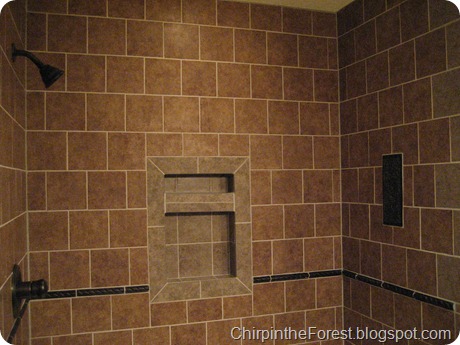 Other details in the shower include the niche for all of our junk: 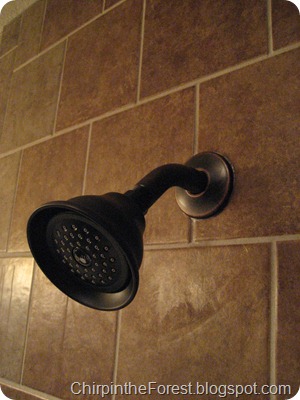 We were having a hard time imagining what kind of flooring we wanted that would fit with our rustic theme.  We knew we wanted tile…but traditional tile just didn’t seem to fit into our concept.

While wandering the tile store, though, it hit us like a plank over the head. (Yes. Pun intended.)

Wood-look ceramic tile.  It was perfect, and we instantly were drawn to it above all other options.  We were honestly shocked to find anything so cool as that tile. 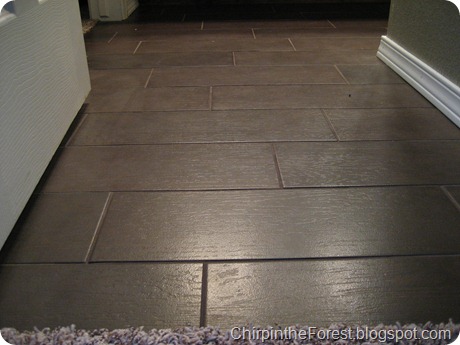 We lucked out with the vanity.  Our contractor’s “cabinet guy” could make us a custom vanity for less than we could buy one from a big-box store.  So we picked knotty alder wood with a dark walnut stain.  We saved a little by opting for flat-panel doors, and we spent that amount instead on five-piece drawer fronts instead of a single-piece drawer front, since the drawers were going to be pretty large.

Here’s a shot with the flash, to show the wood variation a little better: 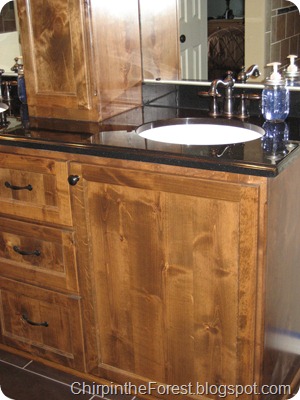 We chose Delta Victorian faucets in the 4-inch spread style:

And I thought mason jar soap dispensers fit nicely with the “theme” as well, so I made two of them.  (If you feel like I’ve been yapping about these for a while…you’re right!  But don’t worry, now that every sink in our house has one, I won’t be making any more for a bit.)

Small aside:  why can’t clear hand soap be actually clear?

I also *really* wanted the hutch that stands on the counter, to provide more storage space.  One of the coolest things about the hutch is this:

That’s right….I have an appliance garage for my curling irons!  With a built-in outlet, natch! (Um, “naturally”, that is.)

And even though they’re not exactly eye level, with a couple of pretty baskets, the top shelves are made very functional for all of our extra toiletries.  Someday when we have kiddos, I imagine this will be a great place to keep the ‘medicine chest’ as well. 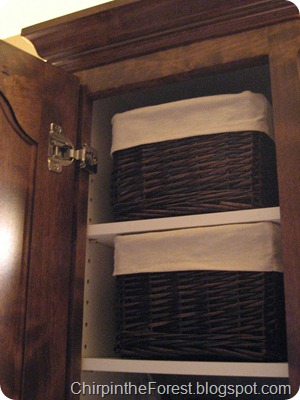 As for the vanity countertop, we researched those options long and hard.  We really like the look of the “high-def” laminate, but we wanted undermount sinks which would’ve added $350 to the cost, making it not-as-reasonable.  For only a little more than the laminate option, we could get the “solid surface” countertop, which is precast of some kind of plastic or ceramic.  We thought the shiny black looked almost as nice as granite, but it was waaaaaaaay cheaper, so that’s what we picked.

It scratches like the dickens.  The same day we pulled the protective plastic off the counter, it had visible scratches.  The cabinet guy scratched it when he placed the hutch on the counter (and felt horrible.)  The plumber scratched it when he set a wrench on it.  And somehow, even treating it with kid gloves, (and I mean KID.GLOVES), it’s currently scratched all over the entire surface, and it’s slightly over one month old.  Using the dust buster to suck up some dust (when we hung the mirrors) scratched it.  Needless to say, we are Disappointed.  We spent a chunk of money on this thing and it looks like crap already.  I’ll be calling the manufacturer to see if there’s a product that would miraculously make it look nice and new again (and I’ll keep you posted) but until then, RUN from the black glossy solid surface countertops.

The light fixtures are Vaxcel brand “Vine”, and I got them from CSNStores.com.

One mirror was cut down from our old mirror for $6.  Then I had the glass shop cut a matching mirror for the other side for $30.

I think that’s about it!

And now you know every.last.detail about our bathroom renovation.  Plus, you probably have one more gray hair, since you’ve been sitting there so long. (I know I do…)

Let me know if I missed anything…and thanks for stopping by.