I got to make Christmas dinner this year, ON Christmas!  It was fun, although it was just for 3 of us, so I can’t say that I’ve done the huge-dinner thing yet.

Every year I learn something new.  Last year, I learned

This year, I learned a few things too.

I’ve tried new recipes for Christmas both this year and last.  This year was a huge success.  Everything was excellent, no one got sick, and we were all stuffed.  So I thought I’d share with you what I made.

Christmas Eve is traditionally a soup dinner for both my and my husband’s families.  My mom used to make oyster stew (not for me, thanks) and also a shrimp chowder that was really good.  Hubby’s mom makes chili and homemade chicken noodle soup.

I like traditions, but I kind of want my own here and there, ya know?  This year I made a butternut squash soup for Christmas Eve dinner.  It’s one of Giada’s recipes, and it was great.  I did not put the sage in the soup, and my crostini were simply seasoned with seasoned salt and pepper (no fontina cheese.) 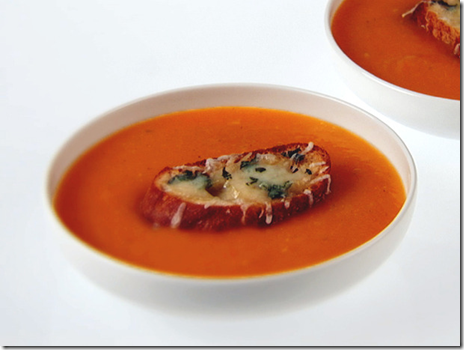 For Christmas morning, “monkey bread” (which I just learned is what sticky-pull-apart-rolls are called) is actually the tradition in both our families too!  So I pulled up a slight variation called “gorilla bread”.  Tasty!

For Christmas day appetizers, I went with the old favorite of a brick of warm brie cheese on a plate, drizzled with jelly/jam and served with crackers.  I chose boysenberry preserves this year because it sounded interesting.  This appetizer is one of the favorites of one of my mom’s good friends.  We often had Christmas Day dinner with this friend when I was growing up, and she served this particular appetizer many times.  It’s a good stand-by to have up one’s sleeve. (Thanks Judy!)

For another appetizer, a more savory one, I tried a recipe recommended on Kimba’s A Soft Place to Land blog.  I checked out Nutritious Eats and the linked recipe and decided that I would try it.  I love goat cheese anyway, and wowza, did this recipe live up to the hype!  I forgot to make it in advance, so it didn’t even sit the couple hours as recommended, and still none of us could keep our paws out of it.  VERY tasty!  (Though I didn’t use the fresh herbs.) 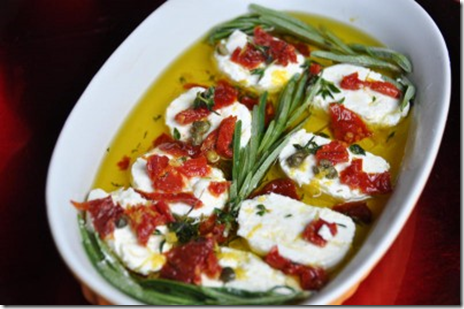 For Christmas dinner, I didn’t go too wild on the side dishes (only 3 of us, after all).  Here’s the menu:

Salad:  The Neely’s Spinach Salad with Cranberries, Pecans, and Blue Cheese (I accidentally bought too few pecans, so after the pie, there were none left for the salad.  It was still a great salad, and very festive too!)  5 stars, if you like blue cheese.

Main course meat: Spiral cut ham with dijon maple glaze (I’ve never been much of a fan of ham, but this one was absolutely delicious.) Five stars!

Side:  Tyler Florence’s Velvety Mashed Potatoes  (I’ve never had Yukon Gold potatoes before, but they give a beautiful buttery yellow color to these mashed potatoes.  I also used the whole pint of heavy cream instead of just one cup

All in all, Christmas cooking was a huge success!  We got some time to bake those buttery cookies I mentioned, too.  They’re called Spritz cookies, and it’s famous recipe of my Grandma’s.  Until a few years ago, it was also a very secret recipe, but now most of the family has it too

Hope you had an equally successful Christmas menu, and let me know what you think if you try any of the recipes above!