As of today, both our heat registers and the vent from the downstairs bathroom have been rerouted. 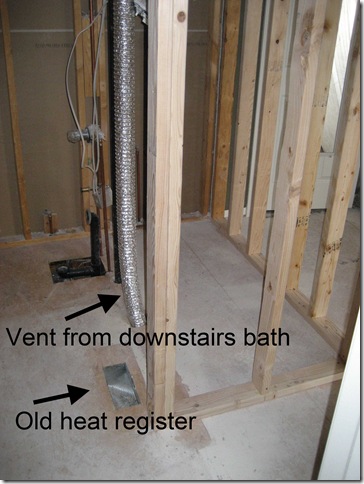 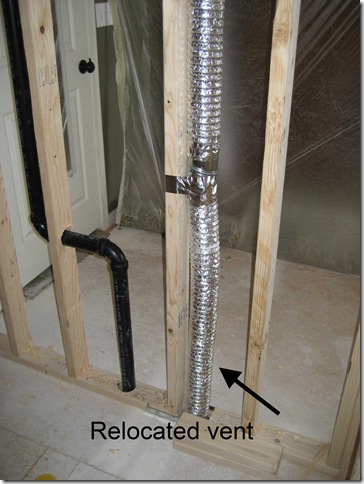 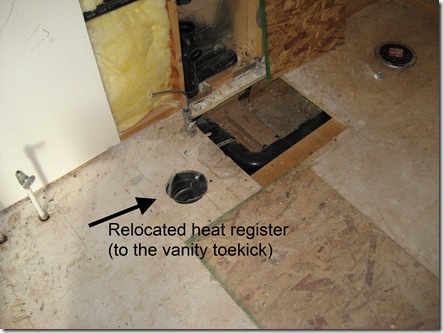 We also have a drain for the new shower:

And the toilet plumbing has been relocated (turns out he didn’t need to cut into the laundry room ceiling either!):

And the bedroom heat register which found itself UNDER the new framing was also relocated: 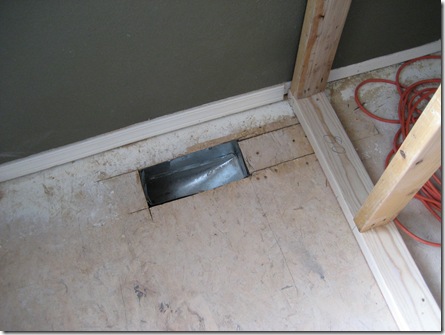 Making progress!!!  There’s more plumbing to be done tomorrow.  Then no more work until next week when Mr. Electrician comes on Tuesday.  Meanwhile, our vanity is being made (we chose knotty alder with a walnut stain).  Sometime this week, I’ll make the final decision on the faucets (need to make a trip to the plumbing supply house) and then this weekend we’ll get our vanity/sinks and tile ordered.  We’re going with a black solid surface vanity top with undermount sinks.

A little more info on the vanity top if you’re interested:

We initially were going to go with the new “hi def” laminate that looks like stone.  We like it a lot and it’s definitely the least expensive option.  It was something like $200 for our project.  But then we found out that if we wanted undermount sinks with the laminate, it would cost $350 extra just to install the sinks!

Well, the next choice up in the price line-up was solid surface.  And for about the same price as the laminate + undermount cost, we could get the solid surface with undermount sinks included and factory installed.

Then someone told us about granite remnants.  If you pick your granite countertop from a remnant of someone else’s project, it’s like $15 a square foot.  What they DON’T tell you is when you add the cutting, polishing and installation of that remnant, it jumps to about $55 a square foot.  And what they also don’t tell you is you have to buy your own sinks and provide them to the granite people to be undermounted.  (I assumed sinks were included in the cost because they ARE included in the cost with the solid surface counters.)  So we got all excited that granite would be affordable for our bathroom….and then found out it would actually cost around $1000.

So we fell back to Plan B – the solid surface!