I haven’t posted my other winterizing posts yet because we got the wrong part for one project, and we got too little material for the other project.  Both will get done this weekend, and I’ll have some winterizing ideas to show you next week 🙂

We were at a fall wedding this past Saturday, and Sunday was for shopping and football.

I took a day off from work on Monday to do some pre-winter yard work.  I forked all the remaining compost in the compost bin into the newly cleared out vegetable garden, and put those plants into the newly empty compost bin to start a new batch.  I did leave one tomato plant in the garden though.  This is VERY uncharacteristic of me, but I left it because it has one of the largest spiders living on it that I’ve ever seen.  I looked up the spider one day and I think it’s a harmless “argiope” garden spider, and because I have actually seen it catch meat bees and grasshoppers in its web (both of which I’m happy to get rid of), I’ve left it alone.  I strategically work around it.  And I felt a little bad about ripping out its plant (plus I would rather have it on a plant where I know exactly where the spider is than displace it and run into it somewhere else!!!)

Here’s a picture from probably a month ago.  I think “lunch” in the picture below is a grasshopper, judging by the leg sticking out.  (Yeah, gross.  I know.)

And here’s the booger now:

I also cleaned out most of my plant containers and put them in the garage for the winter.  I kind of messed up this year by using garden soil to fill the pots instead of spending money on potting soil.  So my container plants really didn’t do that great.  Next year I’ll actually buy potting soil, and then I’ll store the pots over the winter with the soil in them, instead of dumping it out.

Oh yes, and I bought a lovely trellis on sale and tied the ridiculously large climbing rose to it, only incurring a few scratches and scrapes in the process.  Now the rose actually looks decent instead of its former glory as a sprawling, stickery-tentacled beast. 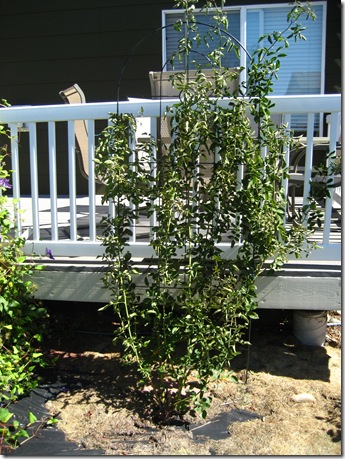 Is anyone else doing winter-prep in the yard yet?