By now, everybody knows about my new favorite decor accessory: mason jars (I usually call them “canning jars”).  I just think they are super cute here and there around the house. I use them as vases,  in centerpieces with filler in them, and I recently just glued a couple to some candlesticks to make my own version of hurricane lamps.

Well, then I saw someone make one into a soap dispenser and I was sold!  I WISH I could remember where I first saw it, but recently, I’ve seen a second version, and the fire was officially lit to finally get going on one.

But to get started, I needed a smaller jar than what I had…and a lid to match.

So while I was visiting my mom over Labor Day weekend, I started rooting around in her cupboards for a smaller jar WITH a lid.

I did find a jar with a lid, and she was nice enough to let me steal it 🙂  Thanks Mom! 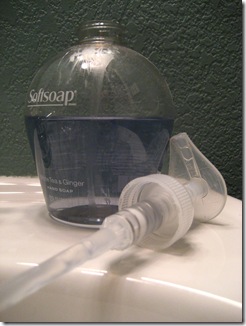 Then I needed to poke a hole in the lid of the jar.  Since I don’t have drill bits large enough, I used a hammer and nail to perforate in a circle in the middle of the lid.  Then I used the closed head of a pliers to just poke the center hard enough that the middle piece broke enough that I could just wiggle it until it came off.  My dad used to always say, “You need to use the right tool for the job.”  Obviously…. I didn’t do that here, but you’ve gotta work with what you have 🙂

Then, with a little bit of effort, I pushed the pump down into the top of the lid, where it’s tight enough to not need to be glued.

Finally, I used some twine to decorate the outside of the lid just a little bit. 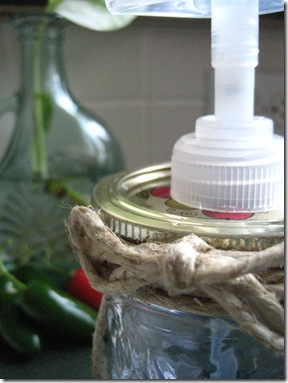 So now I have a nice little decorative soap dispenser for my kitchen sink, and it’s small enough it can even sit right on the sink instead of on the counter.

Thanks for stopping by!

Don’t forget to hop over to the “Frugal Fall Decor” post from a couple days ago to enter the giveaway.

I’m linked up to:

Chic on a Shoestring

Making it With Allie

Thinking *forward* to warmer days and a more interesting landscape. We've lost many plants and trees over our Colorado winters, so I'm always anxious for everything to awaken each spring 😬. I'm definitely the crazy lady who digs in the bare soil or scratches the tree branches looking for green. 😜 Then, after they've proven to be alive, I get SO excited to see how much growth everything will put on! In a young landscape like ours, every year is epic 😃 . What do you most look forward to in the spring garden? Green? Privacy again? The excitement of new growth? Possibilities for new plantings or projects? ALL of the above? 🤩🤩🤩
Top nine of 2019! It's been a fun year of sharing garden moments, and I can't wait for all the projects and progress to come in 2020 . 🌱🌷🌼 . . So, what are you excited for in the new year?!
💧Are you keeping up on winter watering?💧 🌲 I have a monthly reminder to water our 8 young evergreens, or I would totally forget. If the ground around them is dry, I give each plant about 2 gallons (it should probably be much more) with a little waiting time in between. I keep an eye on their brighter green leaves to monitor dryness and hopefully avoid sad, copper-colored evergreens come spring. 😬 If the plant is still surrounded by snow, I skip it, like the three arborvitaes next to our West fence. They're in a shadier area that's been covered with snow since Halloween, so I'm guessing the ground is frozen over there. Ahh, micro-climates 🙃 . . Do you water your evergreens in the winter?
It's the last day of school before Christmas break, and I'm feeling festive 🎀. Maybe I'll even (finally!) pick up a matching string of lights today for our second bush in front of the porch. 🤩 Other tasks include a couple last minute 🎁 and stocking stuffers, too. 🎄 I also need to double check my recipes 🥧 and make sure I won't have to run to the store on Christmas Eve! 😬😬😬 . 🎀 What's on your list to still get done before Christmas??? 🎀 . . . #christmaspreparation #christmaslights🎄 #holidaylights🎄 #holidayporch #christmastimeishere🎄
Happy birthday to me! 🎁 My husband watched my last YT video about gift ideas for gardeners and got me one of the "wish list" items I mentioned! I'm so excited to try my new, adjustable sifter this spring for sorting rocks from soil, compost sifting, and I think I'll also use it to break up old potting soil to mix with compost and re-fluff. 😅. And, sweet man that he is, he also saw this highly rated Japanese Nejirigama hoe and thought maybe I'd like that, too! 🤩 I do, I do! I'm not sure exactly how to use it yet, but I'm "s' hoe" 🤣 excited to find out. 😎 . . . #gardeninggifts #gardeninggift #nejirigamahoe #soilsifter #gardenpuns #punintended
There's always an overachiever! . . . #paperwhites #bulbforcing #wintergardening #narcissusflower #forcingbulbs #indoorgardener #flowersmakeyouhappy #holidayflowers #itsmybirthdaytoday #noreallyitis
%d bloggers like this: