You know those black soaker hoses?  My mom used to use them ALL the time in her gardens.  They do work fairly well (better than sprinklers at least) and they keep evaporation down in our hot summer climate.

I tried to find some at Kmart a week ago and they didn’t have any.  Good thing, cuz I found something better!

Our raised veggie bed has an irrigation system.  Here it is back in March:

For some reason, it had been cut and plugged.  So we trotted out to Home Depot and bought a connector to hook it up back up again.

Then we turned on the sprinkler system to see how it worked.  The zone we turned on also contains some areas of the front yard.

No water was coming out in the front yard areas, but the zone was turned on.  In fact…there was no water pressure at all.

And then…..we stuck our heads around the corner into the backyard.

I think we were probably the laugh of the block that afternoon as we stood under the plumes of water looking for their source and laughing to ourselves about how nice and green our back neighbor’s grass was going to be.  Seriously, the water went up at least 15 feet and right over the fence into their yard.   It’s a travesty that I didn’t get a picture!

Ok, so now we knew why the irrigation to that raised bed had been plugged.  There were two holes in the hose which needed new sprayer deals.

Back to Home Depot.

After spending a little more time in the dripper-system aisle, we found some neato stuff!  Bonus – it was nice and cheap.  We ended up buying some skinny little tubing and instead of putting new upright sprayers into the holes (similar to the ones you can see in the picture above) we opted to do this: 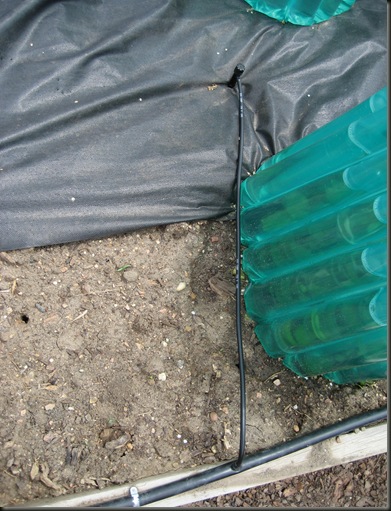 Those are more like drippers.  They spray 360 degrees, but it’s not a fine mist or a high pressured spray.  I’m hoping it will be more effective than the high pressure, fine misted sprayers around the rest of the bed that literally hit the plants from the side with the water.

Well, the back garden (where the raised bed is located and which is mostly devoid of plants right now) is going to need some kind of regular watering system.  The areas on each side of the deck will need some as well, since the sprinklers don’t hit those areas.  And I was going to use soaker hoses.  (Oh, and apparently drip systems can be rigged up for patio pots too….I’m still thinking about that one.)

But soaker hoses?  Not anymore 🙂  They’ll be my back up plan.

Oh the possibilities with all those drip system components!!

I haven’t bought the supplies yet, or even mapped out what I want to do or figured out how it all works, but you’ll know when I do! : )