Has anyone seen that show? Where nothing goes right? And the simplest task seems to open a can of worms?

Remember how I said the remaining items on our list to have the floor “completely done” included installing the new dishwasher? And remember why we bought a new dishwasher to begin with? (Because the old one required a bowl underneath)

Here we go… (Tutorial on plumbing coming up! Learn from us Peeps!)

In a nutshell, we cheaped out and decided to install the dishwasher ourselves and save some money. We bought the special $20 GE installation kit (with the new connectors and water intake hose).

Apparently there are two ways to install the drain hose from your dishwasher to the actual plumbing under the sink. One way (the one that makes the most sense to me) is to attach the hose to a special place on the garbage disposal so that your dishwasher water actually drains through the disposal. This makes sense…..right? Because then any food particles will be subject to the disposal rather than going straight into your pipes.

Here’s a grody picture to show you what I mean 🙂

See the top input? That’s where the hose from the dishwasher is supposed to connect. Then the stuff flows back out (and into your plumbing) through the bottom connection.

Our strategy was to install the new dishwasher exactly the same way as the old dishwasher had been installed (you know, since we didn’t know what we were doing). Except our old dishwasher used the ….ahem….OTHER way of connecting to the plumbing. Like this:

We decided to install the new dishwasher so that it connected to the disposal. We felt this was probably the “right” way which should’ve been done since the beginning.

The problem now? The connection INTO the disposal has a plug in it, since it’s never been used. The disposal needed to come off and the plug pushed out with a screwdriver.

Taking off a disposal should be easy right? Everything we saw online indicated it was a piece of cake. RIGHT…

Here’s what we ended up with: 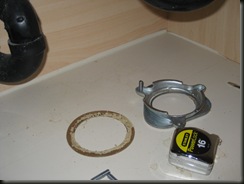 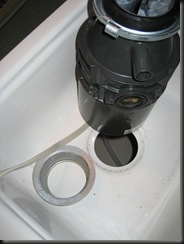 Oh! You mean….taking off a disposal shouldn’t result in removing the entire drain!? Oops!

In trying to “unscrew” (yeah right) the disposal after we loosened the appropriate screws, we realized we were turning the entire drain basket as well. All the plumber’s putty was squishing out around the sides or flaking off completely. At this point, clearly we would have to completely remove the drain and reinstall it with a new seal. (I actually didn’t mind because the plumber’s putty was REALLY brittle and so were the rubber gaskets, so I felt like we were probably fixing a future leak before it became a leak.)

See that funny looking metal ring sitting next to the tape measure? That, ladies (and gents), is the MOUNTING RING. Took us forever to figure that one out. Ok, so now see the silver ring around the neck of the disposal? That ring connects to the mounting ring to suspend your disposal under your drain. We struggled and struggled to figure out how these two pieces came apart. Finally I took a hammer to the piece stuck to the disposal and knocked it sideways far enough that it would let go of the mounting ring and the disposal basically fell into my lap. (I just have to note that Hubs had been working on this for a while….I sat down with a hammer and was immediately successful! Yeah!)

Now we were left with a drain (which clearly needed to come UP out of the sink to be removed). But under the sink, the mounting ring was still attached to the drain. I twisted and spun that sucker trying to figure out how it came off. Turns out the mounting ring is held onto your drain by what’s called a SNAP RING. This snap ring doesn’t screw on or anything like that….it snaps on. (duh) Well, you have to figure out how to get it off in order for the mounting ring and the gaskets etc to come off so that you can then lift the drain up out of your sink.

Apparently, you use a screwdriver to PRY the snap ring off. Then it is ruined of course. Also something we spent FOREVER trying to figure out (and Hubby wanted to call a plumber at this point). Now we were drain-less, with a bunch of ruined parts.

Your local home improvement store sells kits with the gaskets, snap ring etc that you need when you uninstall a drain like this.

We ended up using major force to get the plug out of the hole on the disposal. Hubs picked up the kit to put our drain back together (and reinstall the disposal), and he took some time off work yesterday afternoon to put it back together. 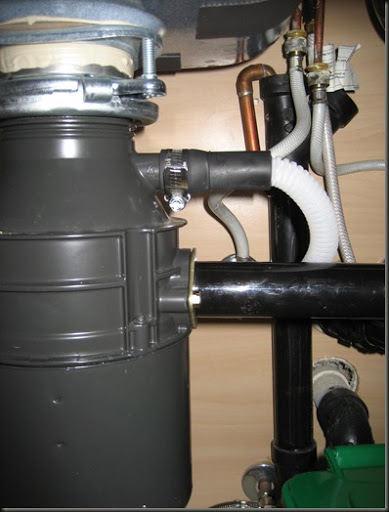 One thing you have to do with the hose into the disposal is suspend it from the top of your cabinet, like this: 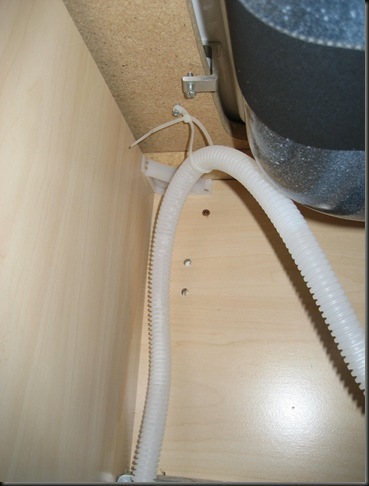 And here’s our newly installed dishwasher!

You may be asking why the bottom panel is missing.

That’s an easy one.

Ok, so DIY dishwasher plumbing isn’t exactly “chic”. But it’s cheaper than hiring a plumber and not that tough after you screw it up a few times – or learn from us screwing up 😉

Amidst all the "staying in", spring is springing outside and the daffodils are coming into their glory! The dappled willows and the crabapples are ready to pop - another week or two and those will be leafed out! 🤩
After a long, dreary winter, signs of life are springing! 🌱 Rhubarb, daffodils, sedum, Shasta daisies, and our spring pup, Teddy, are brightening up our somewhat snowy, definitely soggy, backyard. I'm 🌷grateful🌷for the new season, even if it's still moody. I need a little (no, a LOT) of seasonal energy to propel me through the next several weeks of virus-mandated virtual learning for all 3 kids in the midst of full workloads for myself and Nick. Lord, grant me strength! (...and sunshine, and green leaves!) 🌱🌱🌱 Tell me, how are you holding up???
My goodness. I've been so preoccupied with other responsibilities this winter that I'm only just now getting to ordering seeds! Normally, I'd be starting a few around now, but I have two weeks of travel coming up, so I won't start seeds until after spring break. ☀️🌱 For now, I'll order what I haven't already found locally and cross my fingers that Burpee still had what I need! Oh! And it's going to be 70 degrees today! I'll be boosting my vitamin D with a little yard cleanup! 🥳🥳🥳
Winter composting is a little bit slower, but after clearing my bin in the fall and adding to it all winter, I usually have several (sifted) buckets of finished compost by spring. Next opportunity, I'll do a winter composting update on YT to show just how well it's coming along. Are you keeping up with winter composting?? 😃
A little winter gardening with my favorite helpers ❤️ (though I'm not thrilled to see that daffodil poking up already 😬)
After some winter doldrums, today was a beautiful day and I was inspired to get my seed act together. One of the sleds is coming in handy as I sort for salvia seeds 😅
%d bloggers like this: